On the 21st Sept there was a meeting of the Reference Group, which are the people who are supposed to be helping the Scoping Exercise Consultants for Port Royal understand what the town wants and what has been considered before.

I thought this meeting was to consider the ‘proposals’ of a concept building described to the public back at the end of June. But it seems as thought I was once again confused, this concept has still not been kicked into the long grass! 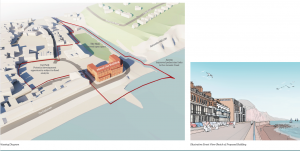 From the Press Release ( which I have found on the EDDC site but not managed to track down on STC) it would appear to have been a meeting about the results of the survey which closed at the end of July. This survey was a very poor specimen of its type, all the questions were built on the assumption that a major redevelopment of replacing every building currently there WOULD happen.

The Neighbourhood Plan had over 1,800 responses, and included a section about Port Royal: the Retain-Refurbish-Reuse petition collected over 1,800 signatures in favour of renewing current facilities. Yet the press release trumpets their outstanding success at getting 250 people or organisations to complete the survey, and seems to think that their results are more trustworthy than those in the Neighbourhood Plan survey.

Surely the mere 250 respondents shows what a bad survey it is rather than indicating a lack of willingness to get involved? This survey should be a source of shame and the results should be given little weight.Some respondents took the time to express their disgust with the standard of the survey, I do hope those comments will be released too when the time comes.

They say in the press release ‘ It is clear too that, in the main, the people of Sidmouth would like to see bars and restaurants as a feature of any proposed development and that the Lifeboat Station is integral to future plans. A new multi-function facility which could host water activity and The Sailing Club ….’ They are right about the Lifeboat, but other surveys don’t show an appetite for a new multifunction facility to improve things for the Sailing Club and also host other water activities there too. There is a lot of interest in increasing the water activities available at Port Royal but that interest is by no means tied to the Sailing Club, and shouldn’t be. Joining them together decreases design options and creates unnecessary limitations.

According to the Neighbourhood Plan surveys restaurants have mixed levels of support and bars are not mentioned strongly either!