Photomontage is a very good way of getting ideas across but there are some drawbacks.
One of these is the tendency of the camera to distort perspective and thereby minimise the effects of the proposed building. This is especially true when transparencies are used and details are omitted, because a plain block looks less busy and ‘intimidating’ than it would with all the details included.

As we have not been given any details of how it might look I have not exercised my ingenuity, or exposed my lack of drawing skills, in order to depict some.

So if you want to estimate the feeling of it looming over you go and stand near an Esplanade lamp-post, look up, and image twice the height 🙂

I acknowledge the copyright of Jillings-Heynes in the first image.

Having looked at photomontage of the elevations we now need to consider the footprint in plan view. They have made some fundamental errors in this proposed plan view and eventually I got the EDDC official to admit that they had included the toilet block when they knew that they couldn’t. The justification was that any developer would want to check the Land Registry documents for themselves! This is baloney, you can’t propose land for redevelopment when it can not be redeveloped. It is like your neighbour trying to offer their garden and yours to a developer to build a new house. It doesn’t matter that you will be able to prove, after a lot of upset, that they can’t use your garden; your neighbour is attempting a fraud on both you and the developer.

The Ham was given to the town under a very specific Conveyance drawn up by the man who owned it, who was also a Solicitor and had served on the equivalent to the Town Council for decades. He took a year in wrangling with the Urban District Council (STC equivalent) before things were to his liking and he handed it over. It was immediately registered with the Charity Commissioners, with the Trustees being the members of the UDC ( our Councillors). So our Councillors are the Trustees and there is a conflict of interest between that position and their attempt as Sidmouth Town Councillors to use part of the Charity Land for redevelopment. At least that is how it seems to me.

The maps below show the extent of the Ham and where the proposed development overlaps it.

Although the pink ends in approximately a straight line the wording of the Conveyance makes it clear that it includes any foreshore which abuts it.

This satellite image, copyright Google, is very useful as it shows the browned grass where the Folk Week Ham Marquee stood. Outside it, to the south, can be seen the area covered by the food concession vans. 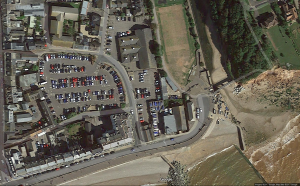 The next image shows the original extent of the Ham, in 1896, overlaid on to the satellite map. 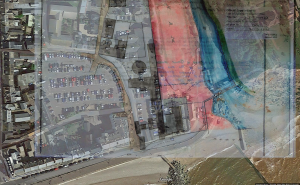 This is the actual limit for the proposed redevelopment, shown by red lines. 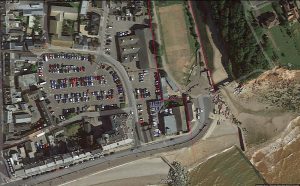 So this is what their drawing should show 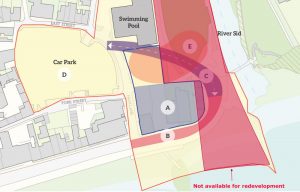 The Land Registry document DN322835 shows the ownership of the toilet block, and notes in section C that it is covered by the terms of the 1896 Conveyance.

They can not use parts of the Ham for boat parking, or an access road, because then the land would not be available for the purposes of ‘free’ enjoyment, the use would be restricted. Worse it would be restricted for the use of a private club, and using public land for the benefit of any private enterprise is strictly against Charity rules. All Sidmouth Town Councillors would be liable, and probably subject to disqualification, if they permitted this.

If boat parking can not happen on Ham land then there is no other choice than to take land from the car parks if this went ahead, or else to lose the Club itself. People were told repeatedly by the EDDC official at the Kennaway House meeting that the size and footprint of the proposed building HAD to be that big in order to get sufficient money to retain Lifeboat and Sailing Club facilities.

A major concern for me is that attempts will be made to use this consultation as giving approval for the transfer of land out of the Charity (as in the first guidance link below).

Charity Commission guidance
Extract from guidance for Local Authorities as Trustees
What is involved in being a Trustee
A conflict of interest
Trustee disqualification  It is not clear to me whether, as all Sidmouth Town Councillors are Trustees, disqualification would prevent someone being a Councillor too.