On the Drill Hall Research Site I have images of what the front originally looked like. There are photographs and a professional Architect’s drawing.

Working from these I have produced the image below. The oriel windows (projecting bay windows ) are shown as flat sided although the originals were curved, as that is a way of cutting down on cost. The original curved windows were as much a practical feature as an aesthetic one because curved glass panels break less easily. Modern glass technology should allow sufficient strength in flat panels especially as double glazed units; and I would imagine it would be quite challenging to produce curved double glazing!

The balls on the top of the pillars should be seen as a ‘placeholder’ design (something which is only vaguely like what will eventually be done). The front needs to have the pillars topped to remove the stark appearance, the particular design is for later discussion . It would be ideal to recreate what was there in the beginning, but it would be unnecessary expense at this stage unless a cheap replica could be created from some sort of resin compound. I have chosen to use spheres to show the general idea because spheres are fairly resistant to weather damage. 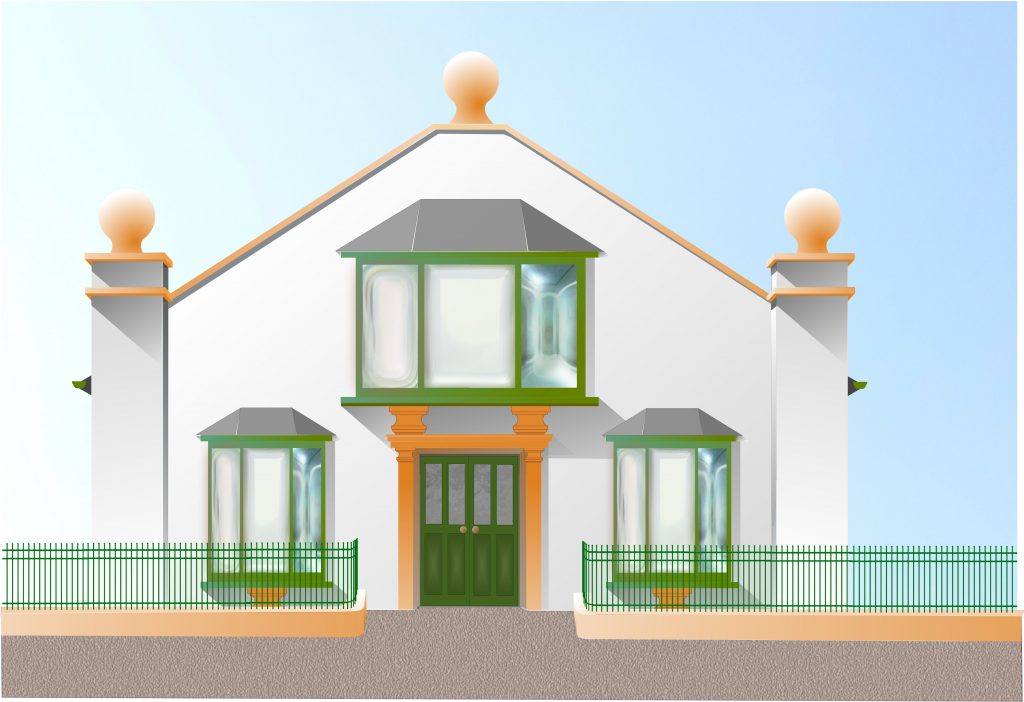 The upper window spans the two window openings which are there now. So the maximum brickwork needed would be the installation of an upper and lower lintel spanning the width and the removal of the pillar between the windows.

I think that when the changes were made to the front in 1931 they took down the top part of the gable and rebuilt it. If so then the full length lintels may already exist.

The lower window and door openings are unchanged but small ornamental stone (or replica stone) elements have been added as a reference to the original richly ornamented facade.

The brickwork has not been exposed and reinstated as, again, that would be an unnecessarily costly option. Instead the stuccoed appearance has been retained and a pale colour applied.

The olive green for the ‘woodwork’ is fairly close to the original specifications as is the Cathedral Glass in the doors.