Mr Radford bought part of The Ham meadow in 1888 and other parts were sold for building. Glen Isla Terrace (now Glenisla Terrace) and Riverside Road were built on two of the building plots.

The Ham at that time sloped down to the level of the Sid river on the east and to the beach on the south. The demarcation between The Ham and the shore would have been the high tide mark. The Esplanade also dropped to sea level at this point.

Old photographs and prints show that the Esplanade, as a high bank promenade, first existed at the west end of Sidmouth. As the popularity of the town as a health resort increased then the walk was continued eastward. When the York Hotel was built on the east side of Fore Street, along with the rest of the terrace of 4 buildings, the walk was raised in front of it. Before these buildings were erected the land was used as a ship building yard and the boats were launched from the shingle. A smooth rather than a sharp drop was helpful in launching!

The original Lifeboat Station stood on the west corner of Ham Lane rather than where it is now on the east corner. Opposite that station there was a launch ramp which at one stage was the end of the Esplanade. Then when the Manager of the Gas Works built East Cliff House as his home ( where the Sailing Club building is now) the Esplanade was extended again.

In 1895 the Drill Hall was built, and the road was extended to be level with the entrance. The seaward part of the sea front was a rough tumble of land and there was a very steep slope from the Drill Hall entrance down to sea level at the hall’s eastern side. A retaining wall stopped this slope on the northern edge, to protect access to the boat storage under the hall.

This is the earliest photograph I have of the Drill Hall. The new Alma Bridge was built in 1900 and the old bridge is shown here. This photograph must therefore have been taken during the first four years of the Drill Hall’s life. The sharp shadow cast by the retaining wall on the north of the slope is clearly visible, as is the height of the piled ground at the end of the Esplanade. 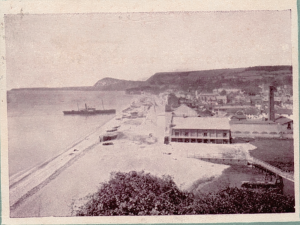